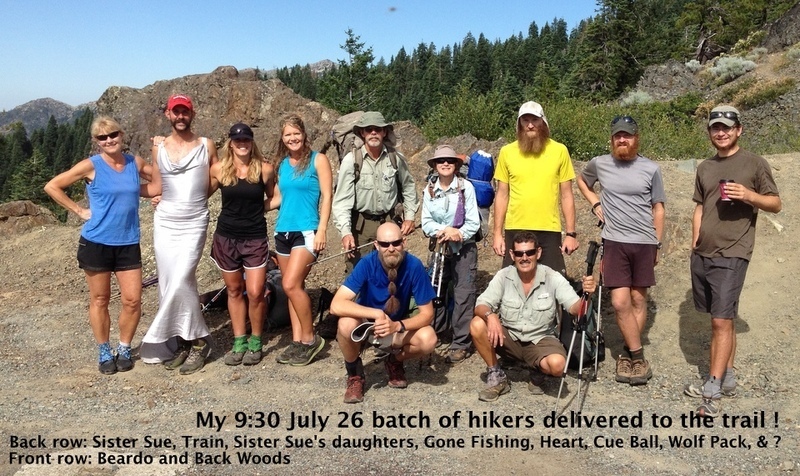 After the two days spent moving camp, etc, Tina hiked west and up from I-5 into Castle Crags then into the Trinity Alps, Russian Wilderness, Marble Mountains, and other sub-mountain ranges of the Klamath Mountains.     She's camping tonight at mile 1627.8 - about 121 miles beyond I-5.

I was able to snag Tina off the trail last night and the night before and take her down to the most excellent town of Etna, California.   The town is now full of hikers and I also gave rides to or from the trail to many of them.

After dropping Tina off at Etna Summit (10 miles way up a narrow winding mountain road from Etna town), I later took up 15 more hikers.    In the first batch we managed to stuff 11 hikers and all their gear into the truck!    That was such an occasion and accomplishment that we had to hold a big photo shoot at the drop off point where I took multiple pictures with each of 13 cameras!   (one hiker had two cameras).

The hiker Train I've mentioned and linked to earlier, had just changed to a new wedding dress (having crossed the 1600 mile mark) and all declared it to be his sexiest yet.    Before we left from the "Hiker Hut" in Etna it seemed almost every hiker had to be individually photographed with him.   :)

I next see Tina and the swarms of other hikers at Seiad Valley.   That'll be sometime on Saturday.