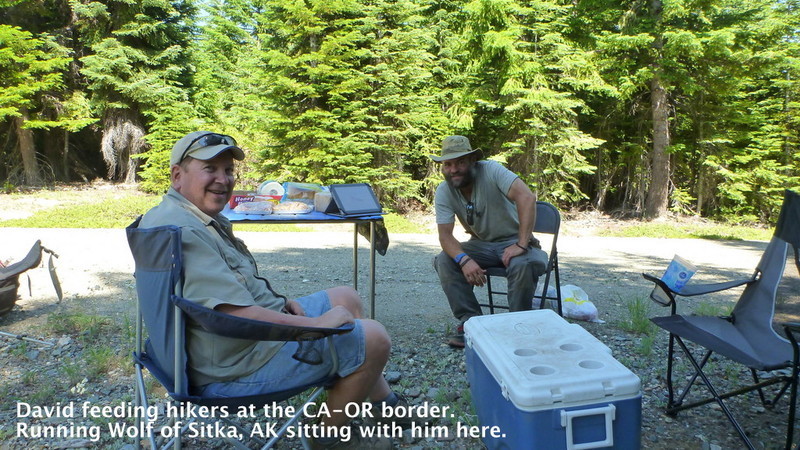 Tina crossed into Oregon on Monday afternoon!   Tina and all the hikers are very happy to be done with their long California "residency" and to get on with the next phase of things!  Even though at the border there are still 970 miles, this feels like a real change to everyone.   Chatting with some hikers at a "magic camp" I'd setup on a logging road just a couple tenths north of the border and we decided it "feels like" the transition from Massachusetts to Vermont on the Appalachian Trail -- there's still a long ways to go, but still you you've graduated from something significant and feel something different.

In the days leading up to Tina's border crossing I've been having some old AT style classic "White Jeep" fun as I wrestled the big silver dually truck up all sorts of crazy logging roads leading up and out of the Klamath River Valley and into the mountains north of there.    Many of the roads had clearly seen no traffic this year yet (e.g., no ruts, just grass, having to rig up my ropes and tackle to pull fallen trees out of the way, etc) and some were completely impassable, but in the end I was able to meet up with Tina a couple times and do a bunch of magic for other hikers too .. e.g., Yard Sale, Banana Pants, Chief, Cookie, Running Wolf, Sister Sue, Thing One, Data, and a few others whose names escape me at the moment.   In the 20ish hours I was back on those roads I never saw another vehicle.   Great fun!  :)

For Tina, the climb out of Seiad Valley was just as hot and gruelling as had been advertised but the scenery has been good and the tiny cafe at Seiad Valley was awesome too.   Tina's reporting that in addition to the overall "look" of the trail changing now that the trees are smelling different as well.   That adds to the excitement too I think.

So Tina's off now hiking away from Ashland .. at mile 1731 as I type this, in fact.   Today she's doing 24 miles, tomorrow 25, and then just 12 since I need to pick her up at Highway 140 and get her help moving "camp" northward.   That'll probably keep her off trail until Sunday morning and then she'll be off again hiking another couple days to reach Crater Lake.