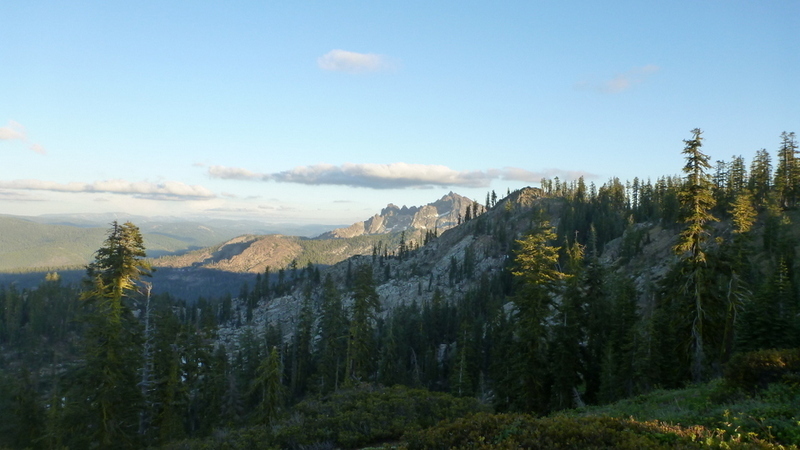 Sorry about the delayed update folks!    Tina headed out this morning to hike into Lassen Volcanic National Park from Highway 36 outside of Chester, CA -- mile 1335.1 of the PCT.

In the ~138 miles since my last report, things have started to settle out to usual trail patterns as Tina re-adapts and gets her trail legs, e.g., hiking 27 miles on Monday as she reached Chester.

The trail and trail towns are filled with thru hikers now -- we've already been passed by the fastest ones -- the ones averaging in the high 30s or more per day -- and now we're seeing the ones that merely average 30 miles per day or the high 20s!    I gave an Austrian woman (Wasabi) about our age a ride into town from the trail and she reported that she'd hiked 34 miles that day and was averaging 30s.   She was positively bouncing with energy (but was very eager for me to get her somewhere that could supply her with a good cold beer ;-).

We've also met former AT trail friends and acquaintances like Frost (whom we met in late Vermont and then many times thereafter including summiting Katahdin on the same day as Tina) and Rest Stop, a triple crown hiker I fed at least a couple times on the Appalachian Trail and Tina enjoyed a long campfire conversation with.

Then there are the new hikers including the hilariously grand Train who is hiking each 100 miles of the PCT wearing a different wedding dress.    We're talking a tall, handlebar-mustached, bald fellow here .. but a natural comedian and funny guy.  When he leaves Chester he'll be hiking in dress #14.   Awesome! :)

Tina's back to having fun with wildlife too.   On her segment out of Sierra City she was walking along and heard a single rattle to her rear.   Of course she had to go find the source and found a very friendly rattlesnake that she then had to play with a bit to get a nice pose for the camera.

The hummingbirds are back too.   As she was sitting once waiting for her water to be sterilized a hummingbird zoomed up to her deep red bandana and hovered to examine it.    Realizing that wasn't going to work it then zoomed up to her vividly purple shirt to give that a good look.   Failing there too it zoomed to a bit of orange on her walking sticks.    Tina could almost hear it harumph in disgust as it flew off realizing that it'd come up dry on all counts!    LOL