For the gear heads among you, the bike is a Fandango 29'er MTB Tandem 19.5/17 frame built up with a White Brothers 100T Tandem fork, Rohloff internally-geared hub, Sun MTX 40-spoke (front) and 36 spoke (rear) rims, Magura Gustav hydraulic brakes, Middleburn cranks and rings, SRAM X-9 front derailleur, and a long throw thudbuster on the rear seat post.   Many thanks to Alex Nutt of MTBTandems.com who guided the selection of the components and put all this together for us on a very short time line back in February.

After we got the bike, we started working on the fit up and further rigging with Bill Baker at our old home bike shop, Black Bar Bicycles of Winchester, VA.

In addition to the usual racks, lights, fenders, saddles, tires, etc type stuff we went through a bunch of trials with the handlebars and console area.   In the rear we wound up going with butterfly bars.   In front we wound up using an Oval Concepts A921 Double Over stem, custom bent aerobars, and FSA XC riser handlebars with generic bar ends -- both sawn down to get as close as possible to the geometry of my randonneuring bike.   Tucked between the aerobars is my Garmin 62st GPS loaded with both the PCT and Sierra Cascades routes and tracks and then also a trusty CatEye that I use as an independent speed and averages indicator.    In the rear there is Garmin cadence sensor which transmits to the GPS as does my Garmin chest strap.

The trailer is a BOB -- the version with the shock on the rear tire.   I would always prefer to be without a trailer when possible since they seem to complicate everything and mess with the dynamics of the bike when standing in the saddle.   But with the gear we had to carry to support both biking plus extra gear for supporting the hike, it was a necessity.  When emptied of the bag, it was also the perfect place to throw Tina's hiking pack whenever I picked her up or was dropping her back off.  And now, having now completed the ride from Mexico to Canada with it, I never did have a problem with it and it was the one tire that never got a flat or had any other tire issues.

With the BOB trailer hooked on the entire rig was almost 13 feet long.   With that length and the weight of the fully loaded rig the very most important bit of gear on the bike turned out to be the parking system I fashioned from a collapsible trekking pole, a strap of velcro to squeeze the rear brake lever, and a string to keep the handlebars from moving.   That setup (pictured below) turned out to be absolutely bomber and made a huge difference in convenience and manageability.

As a final note, we wound up ditching the little flag on the BOB trailer pretty quickly after determining that it was generating a fair bit of drag and realizing that between our height on this bike, the red bags with reflectors, the big yellow bag below, colors and reflectors on our hydration packs, etc that we were plenty visible without it.    With all these factors combined I think we wound up having a safer ride than many cyclists following the route. 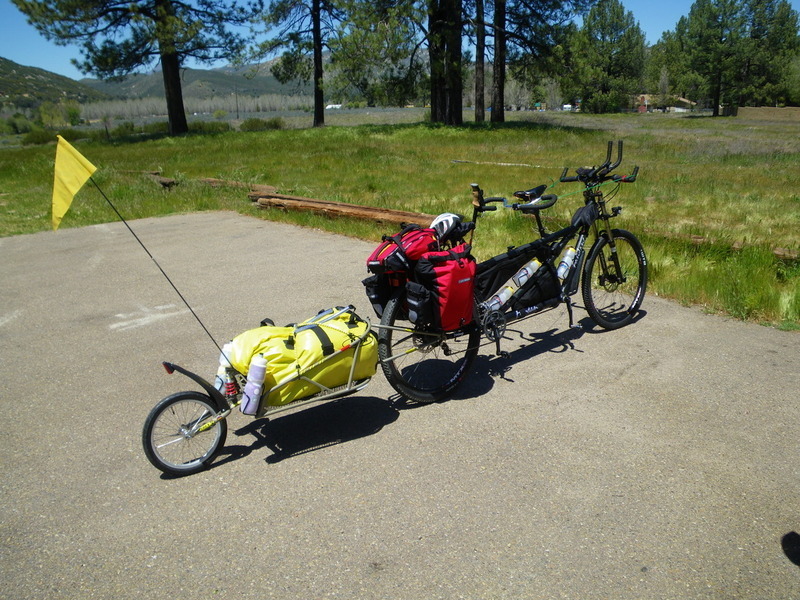 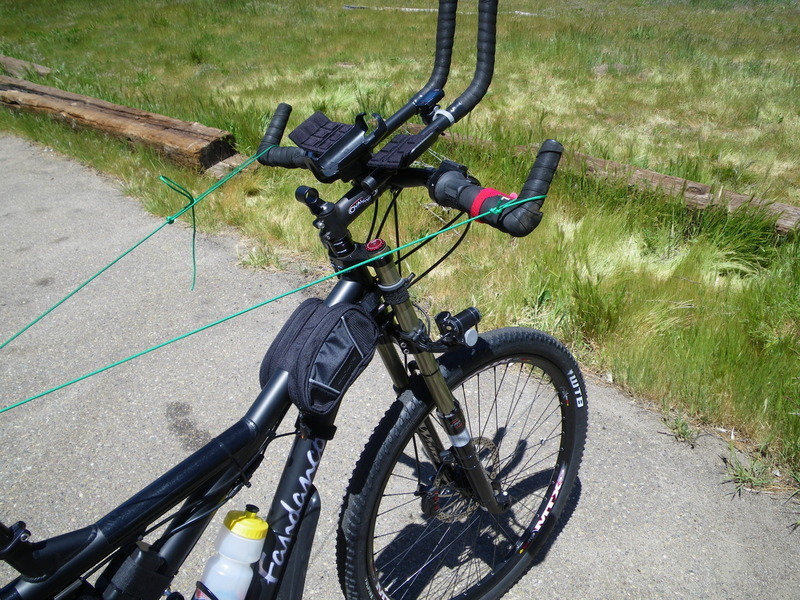 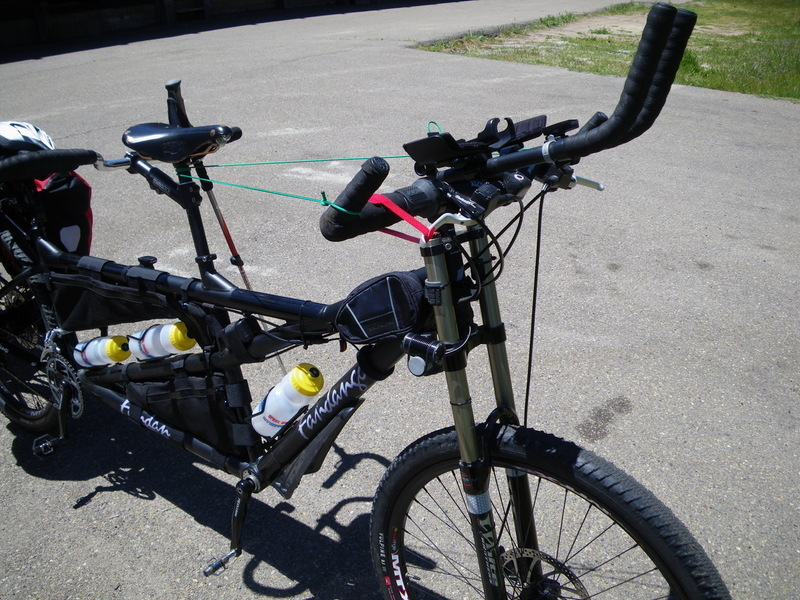 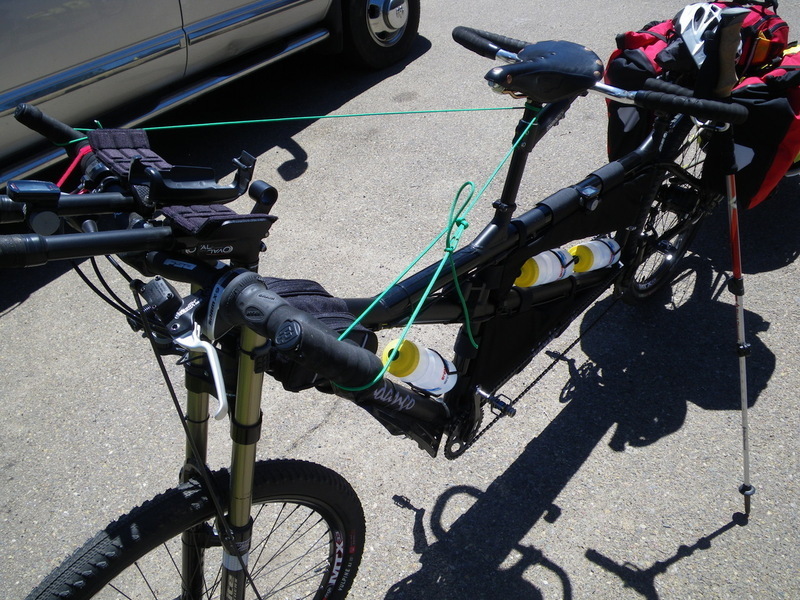 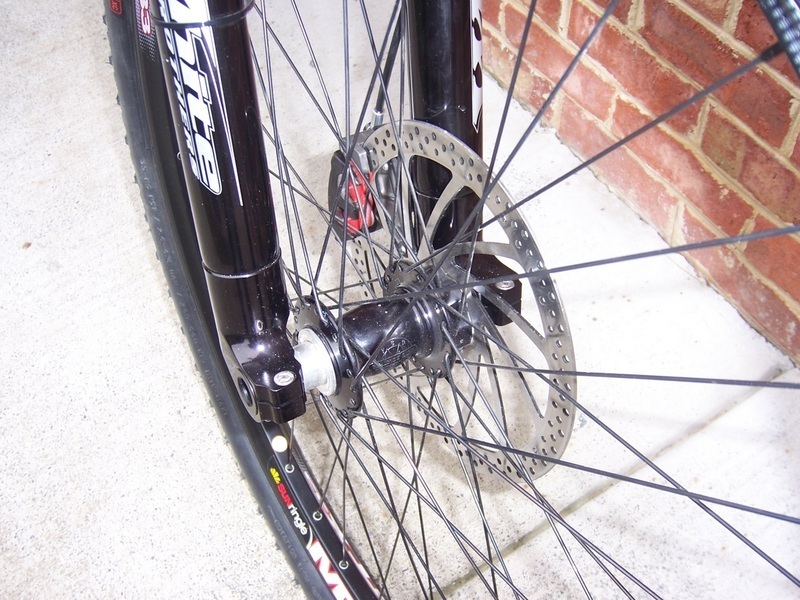 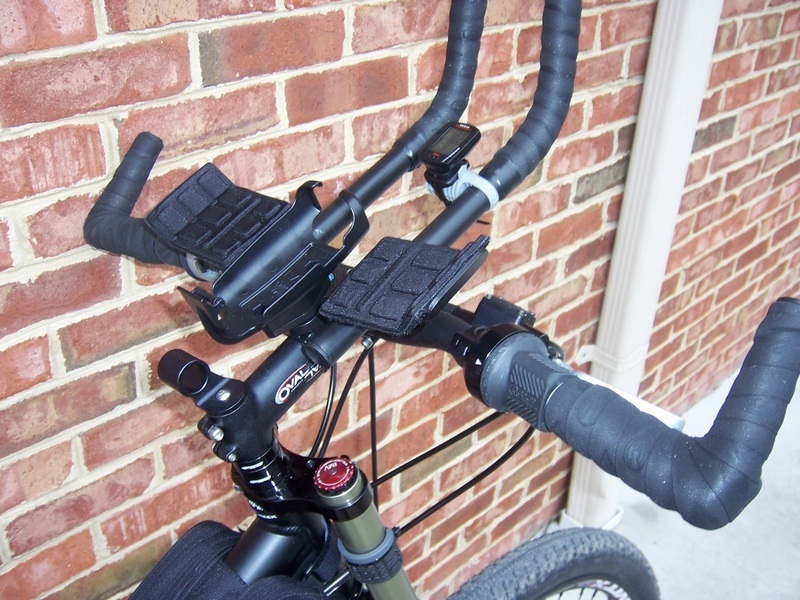 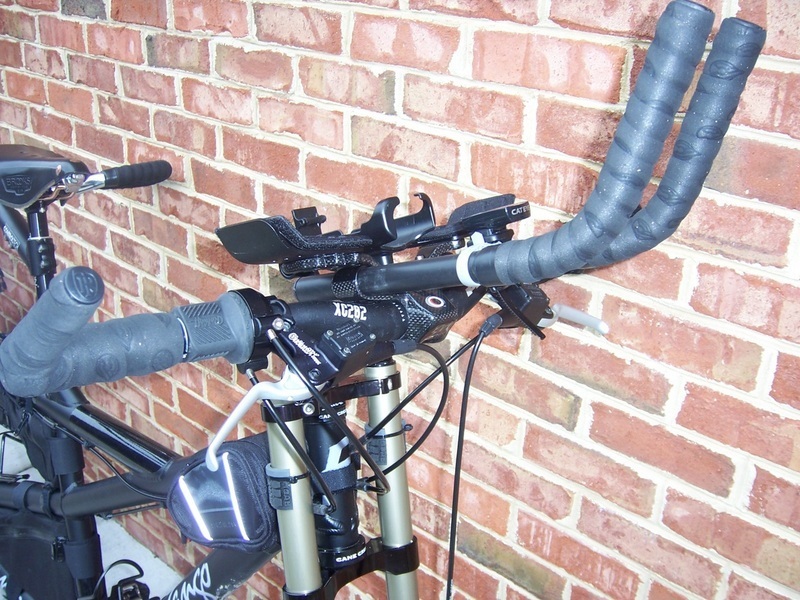 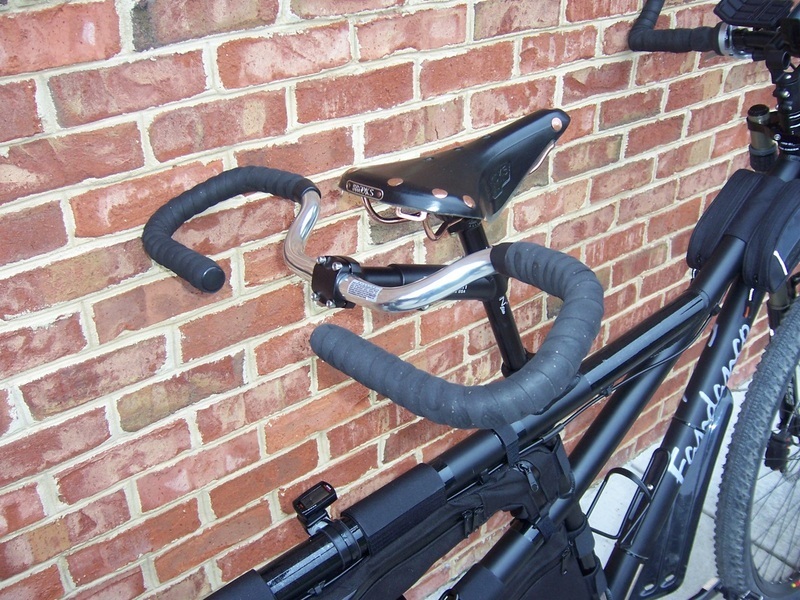 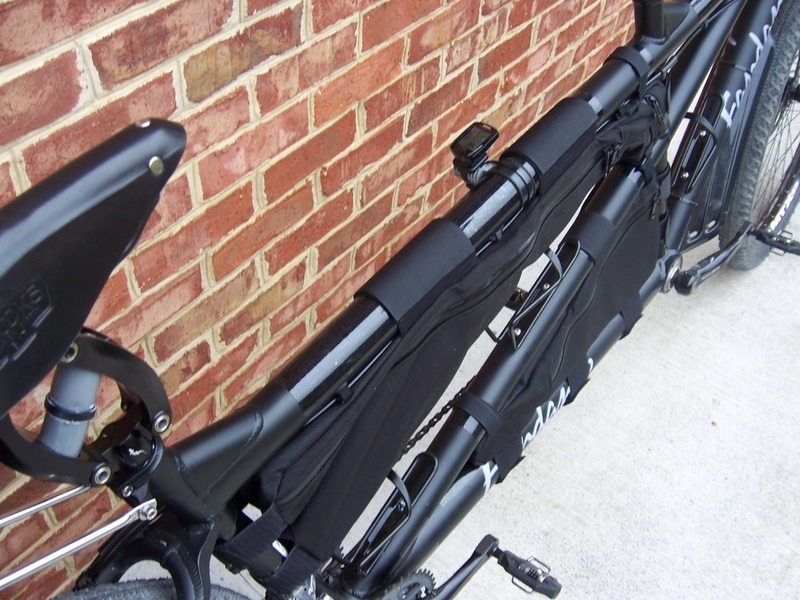 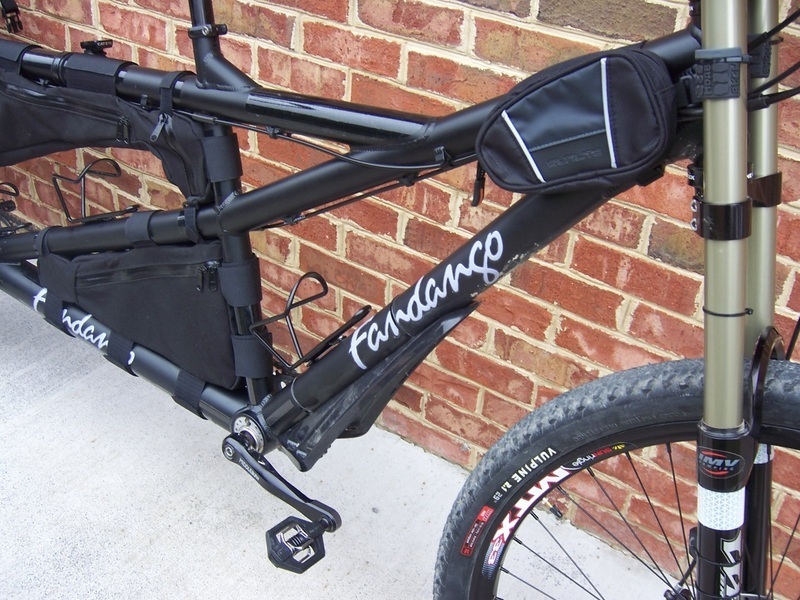 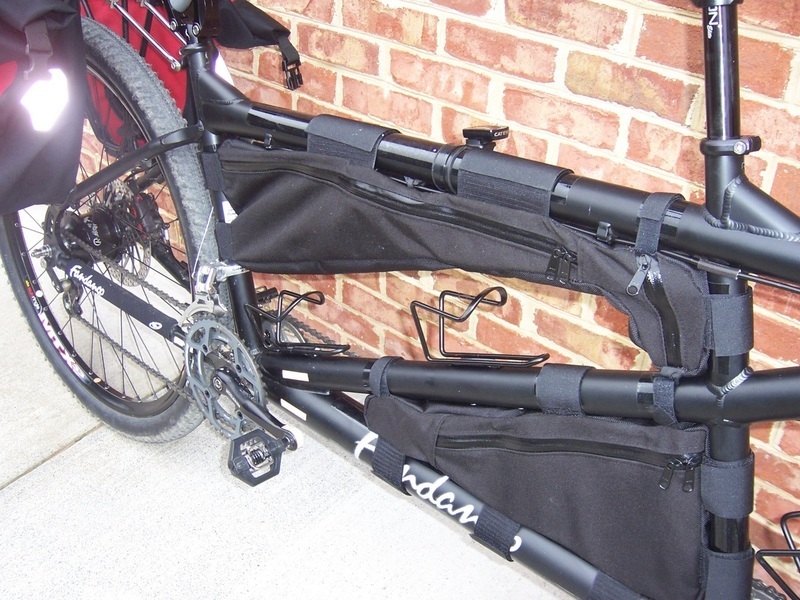 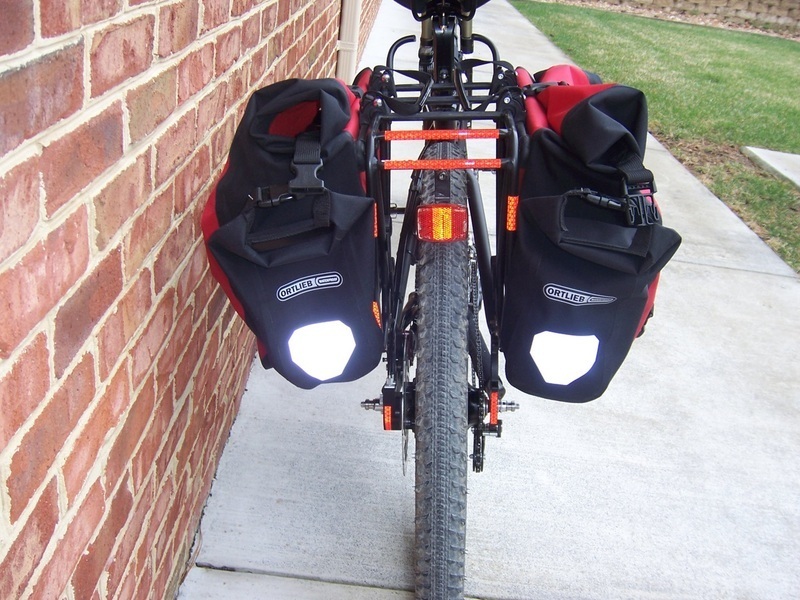 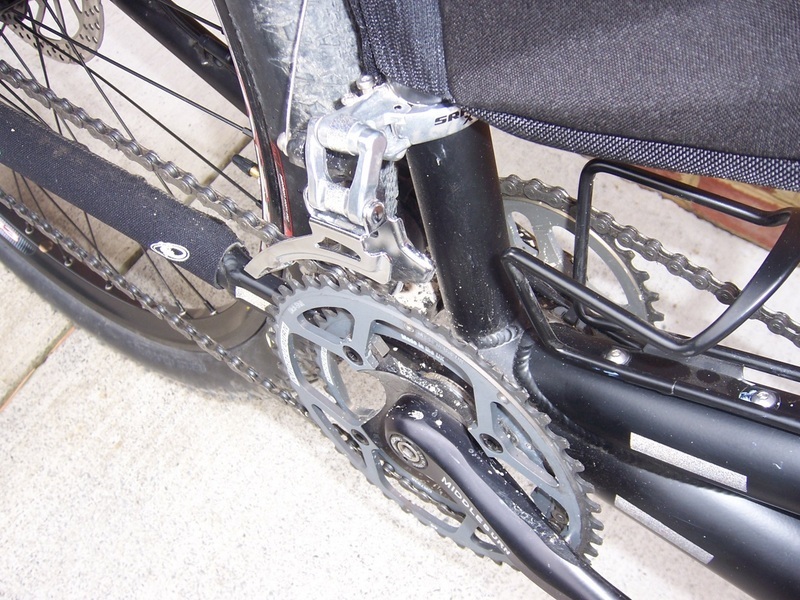 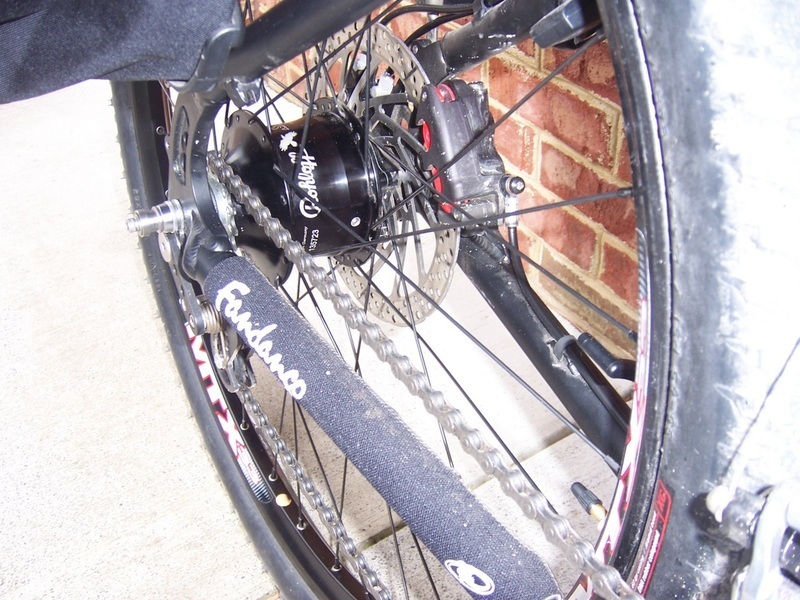 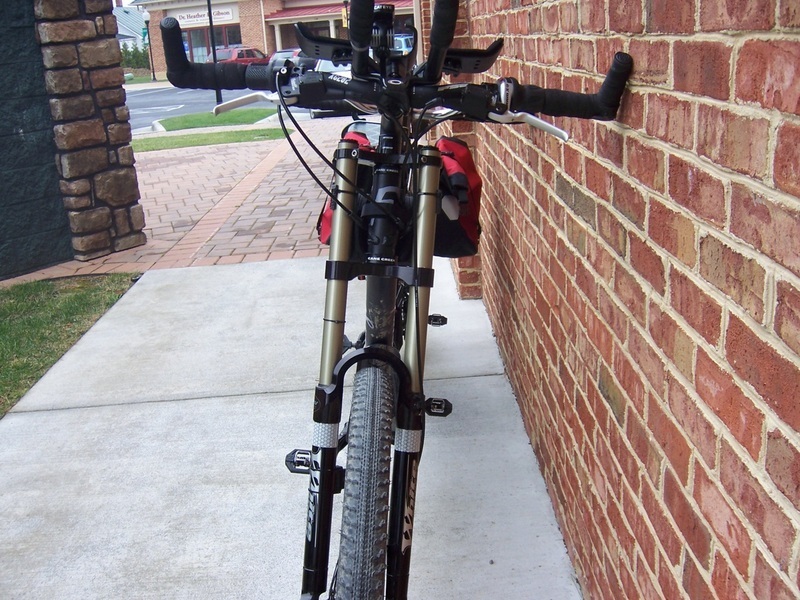 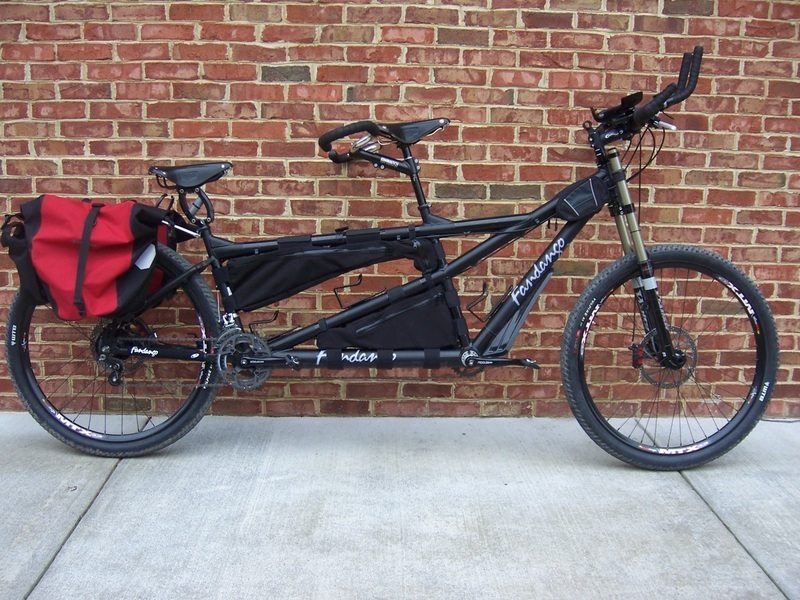