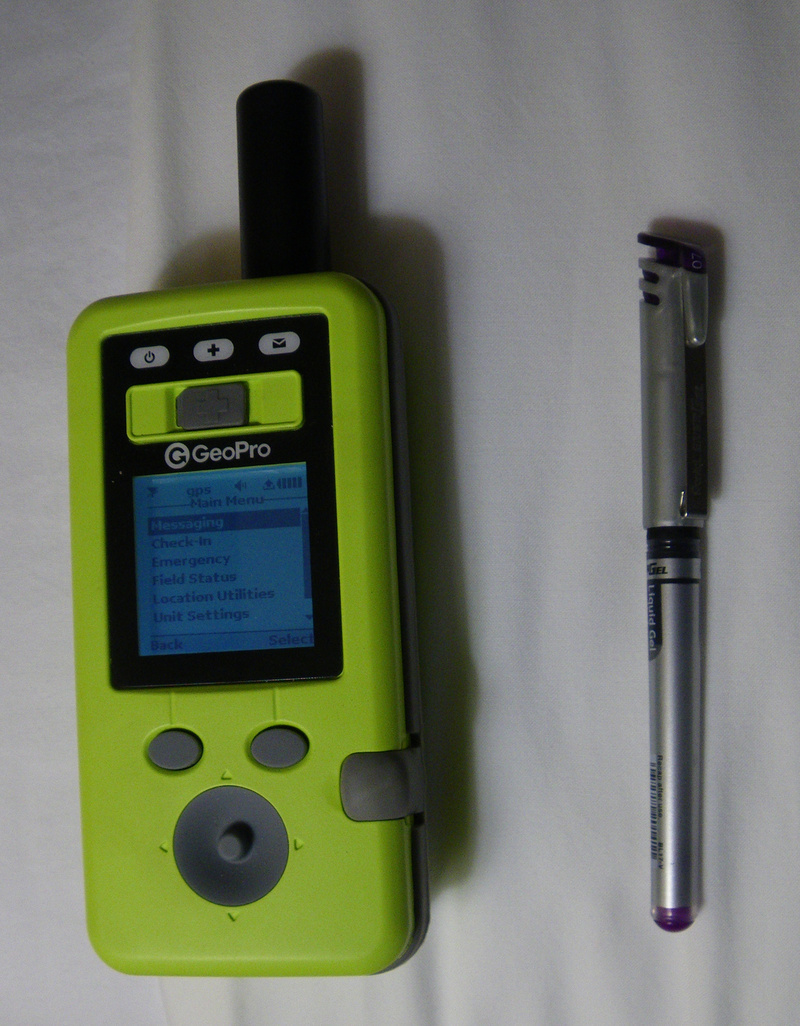 Traveling together but separately the way we do, synchronization and communication are big challenges.    On the Appalachian Trail we used a combination of SPOT, handheld Ham VHF radios, and cell phones.    We got by but the solution was cumbersome and we were often left with a lot of ambiguity.

Since this adventure was going to be even more demanding (e.g., less cell coverage, more time away from roads, the increased difficulty of reaching the trail on bike, etc) I wanted to come up with something better.   Since I've long been a fan and user of Iridium-based services and so I was pleased when at the last moment a promising Iridium-based product called GeoPro came on the market.

I got two of their initial units for testing just weeks before we headed out on the trip (pic below).   Now of course there is a significantly smaller and lighter version available, but so it goes.    The service and devices have their compromises and missing features, but we're nevertheless using them quite successfully in the field and the combination has greatly simplified things while reducing our daily dose of angst.

Below I'll discuss the basic features that are most important to us.   There are others we don't use (e.g., the "In Field" vs "Out of Field" designations, a feature where the system will automatically alarm if someone hasn't "checked in" for some configurable amount of time).

The web service itself is a sophisticated thing designed to allow large organizations to track dozens or even hundreds of device users simultaneously.  This cuts both ways for our application.   It provides quite a bit of functionality but the initial learning curve is steep as one works to get everything configured properly and understand how to use the application.   It also means that some functions one would like to see for autonomous operation are not yet supported.

A covered "911" type button ala SPOT.   When you press and hold it sends an emergency notification to all phones and emails you have preconfigured.   The system confirms to the user that their emergency notification was received and walks them through a second stage confirmation protocol.   The people on the notification list get the initial notification and then also get the "Emergency Confirmed" message.   Unlike SPOT, there is no central emergency operator in the sky -- your notifications go only where you assign them to go.   But on the plus side all those people can exchange 2-way messages with you about the emergency and they can see exactly where you are at.   Also a feature of this is that you can actually conduct full blown emergency drills -- a huge positive.

With one exception, GeoPro's tracking functionality is much more advanced than SPOT's.   For starters, the tracking interval can be varied on the fly from once every 2 minutes to once per day (and of course "off").   Here's the kicker -- not only can the device user change the tracking rate but authorized users (people *you* authorize) of the web application can modify the tracking rate of individual devices.    We use this all variable tracking all the time.   For instance, while Tina was going off trail for her Mount Baden-Powell traverse this morning I changed her tracking rate to once per 5 minutes so that I could instantly answer any questions she might have about where she was, what was around her, which way she needed to go, etc.   As soon as she was off the ridge and back on the trail I changed the rate back to our normal 15 minute intervals and I launched on my 50 mile ride down to Lancaster.

The feature that GeoPro does NOT offer is an API for external web services to intercept tracking messages and do all manner of cool thing with them.    I wrote up this need in some detail and volunteered to do any glue development work or documentation for them but I was basically told to pound sand.   Sooner or later they'll have to provide this feature, tho.   It's just too obviously necessary.

The GeoPro devices can 2-way message with other GeoPro devices, cell phones, email users, and web application users.   Entering messages on the current devices is a bit slow (something like entering text in your Garmin handheld) but it gets the job done.   Also because the messaging is Iridium-based, the device user knows *for sure* when a message was successfully sent to the Iridium constellation and when it fails.   On the down side, incoming messages to the GeoPro devices are delayed until the unit is sending up a tracking message or it wakes up on its own for a message check (2-3 times per hour).   The process works this way so that battery life is conserved and, in practice, is not an issue.   If Tina and I want to interact a bunch we change our tracking interval to 2 minutes during the conversation and then turn tracking off or down to 15 minutes once we are done.

One beef I have with the original device (may be different on the new smaller / lighter one) is that when a message is received the device alarms just once (and pretty softly) and blinks a blue light just a few times.   If you don't notice it then the message will wait until the user makes the effort to check the device (or yet another message is received).    This really hacked me in the beginning but we've learned how to work with it.

Battery life in our units is quite adequate -- 4 to 5 days with our normal usage.   Recharging is just via a normal mini-USB.   No problems here.

Man this bugs me.   It'd be the simplist thing in the world for GeoPro to provide -- just let my device query to see Tina's device location and vice versa.   I've argued my case a number of times with the GeoPro folks but got nothing but silence.    I need this almost every day I'm on the road but instead I have to get my iPad out (fun when you're hot & sweaty on a bike standing at the side of the road) or, when I don't have cell service (often), I have to send GeoPro messages to our support team's cell phones and hope that one of them is around a computer so that they can look up the info and message me back.  Insane.

If the GeoPro service offered a web API which allowed message interception and generation then I could synthesize device-to-device locating on my own plus create dozens of other super nifty functions.    Behind the scenes the company must have this.   It's got to get released at some point.

Missing features aside, using GeoPro we're operating much more efficiently and, I think, safely than we did last year on the AT.   From my perspective it beats the pants off of SPOT and adds an important 2-way messaging capability.    At the same time, I wish that GeoPro Solutions would open their minds a bit to non-corporate/large organization use of their product .. and, well, just *open* their product for creative applications well beyond what they've initially imagined.