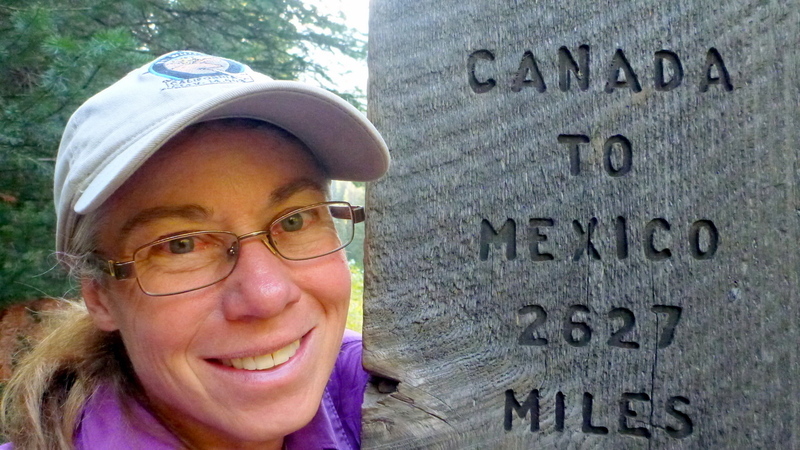 Woohoo!!   Tina reached Canada at 4pm on Wednesday Sept 26th, spent the night a few miles north of there camped with Frost and Halo, and yesterday morning I was able to collect all three at road a few miles further on, get them showered and fed, and then "home" by late in the day.   After two full summers of hiking, cycling, and driving up and down the roads and trails of the Pacific Crest we are alive and DONE!!

It was well time too .. in the final few days Tina's right hip started acting up, her pants blew out completely (forcing her to wear her tights), the zipper gave out on her tent, her air mattress had to be refilled 5 times per night, and her hip belt was not staying fastened!  My oh my ... it was definitely time to be finished!    But finished we are!   :)

I may write again later on with final notes, but one interesting bit before I go.   Some of you will recall that the hiker Frost (pictured earlier here) we met in Vermont in 2010 during his and Tina's Appalachian Trail thru hike.   Through the rest of that hike we encountered him many times and he summited Katahdin just a couple hours prior to Tina (they crossed paths on the way up and down).    We'd had no contact since then but this year as I was letting Tina out on a logging road in northern California, Frost popped out of the woods!     Just like on the Appalachian Trail we encountered him almost a dozen times afterwards (even though Tina took time off for the ankle issues!).   Guess what?   He reached the PCT's "summit" a couple hours before Tina just like on the AT!! .. and then I met him just before her at the PCT's equivalent trailhead.   And all this is without any coordination or effort to synchronize.    Weird and Wonderful Trail Magic!

Thanks again to everyone for all their support during this year's adventure.

All the best, David & Tina