Tina's off and walking towards Hiker Heaven aka "The Saufleys" at Agua Dulce some 84 miles down the trail.    A couple hours ago, Carol, a local trail angel and retired UCSB Political Science professor, dropped Tina back off at Inspiration Point where I picked her up on the bike last night.

Tonight she's headed towards a spring just prior to the ascent of Mount Baden-Powell which she'll save for the morning's crunchier snow.   We heard from a friend who tackled it about a week ago that the least treacherous route is to go off trail straight for the peak and then walk the ridge down to meet up with the trail later in order to avoid the steep snow-covered northern slope.   That's her plan.   I've attached a Google Earth perspective on that with the PCT trace which makes it easy to see what I'm talking about. Unfortunately, I probably won't be able to meet up with her again until we reach the Saufleys come Saturday-ish.   My route was supposed to be SR 2 through the mountains on a path that intersected with the PCT several times but yesterday I discovered that just past Inspiration Point it's been closed for bridge washout repairs.   This morning I chased all around for authoritative information and discovered that the road is out in no less than three places along the route I was supposed to follow.   Yee haw. Consequently, tomorrow I'm headed off the mountain and down to a Thursday AM appointment in Lancaster, CA to get some bike repair work done.   I can't sort out just what is going on but either my front fork is slightly bent, the wheel is bent, or the brake rotor is bent (pretty sure not that but..).   The symptom that developed coming out Crestline, CA a few days ago was that the front brake rotor started making contact with the fork strut (pic attached).   As luck would have it I rolled to a stop right in front of house of Jim Harlow, former pro mountain bike racer and modern day bike collector and connoisseur.   He came right out and gave me hand in trying to figure out what the heck was going on.   Ultimately we were able to work around the issue by tightening down the axle in the just wrong way, but the root cause remains a mystery.   It was quite the bonus, tho, to be given a tour of Jim's collection of classic and often amazing bikes.   He also warned me about a steep climb just ahead advising me to not freak out since it was only a couple hundred yards long.   I was glad to have it because I *would* have freaked out if I hadn't known that ahead of time!!   That's all for now.   Tomorrow I'll write about the interesting satellite technology (no, not SPOT) we use to keep track of each other and coordinate things when there's no cell phone coverage -- which is often. All the best, David 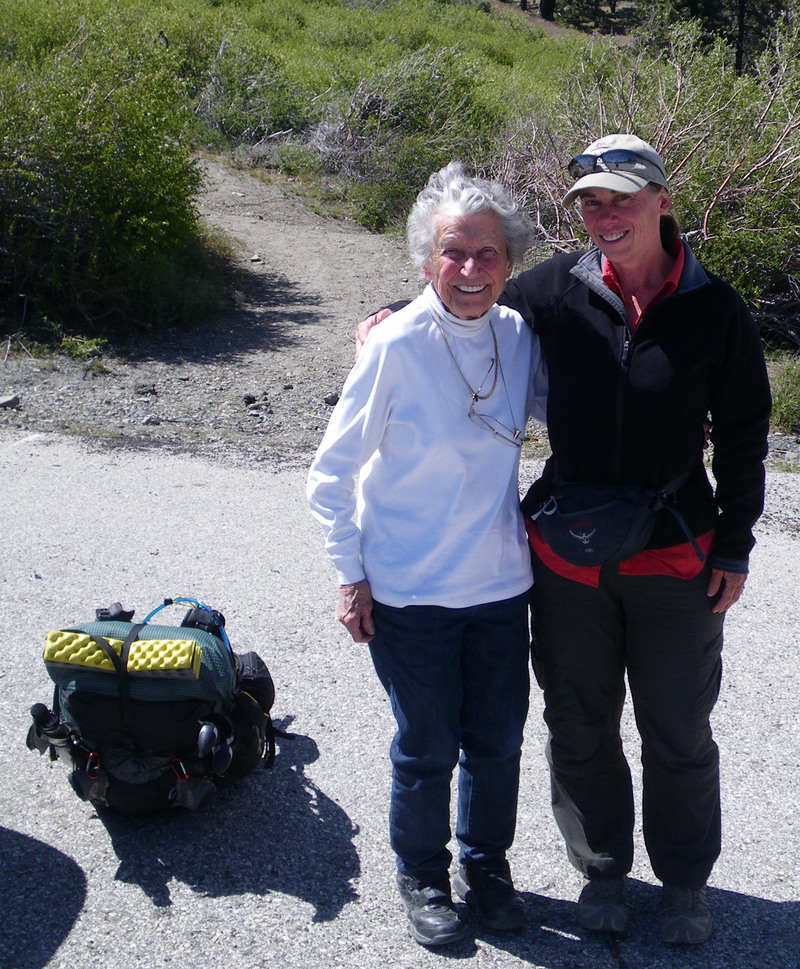 Tina had a huge day today hiking 27.5 miles (from mile 342 to 369.5) climbing 6700 feet and descending 2500.   She's definitely got the twitchy legs tonight!   I tried to get her to try out my Skins compression tights which are supposed to help with that but she was already horizontal and so it was a "no go" ;-)

I had a milder day although it was 100% climb for ~5000 feet over 17.5 miles up to Inspiration Point where I met Tina.  From there we had a bone chilling but thrilling 5.5 mile ride back down to Wrightwood averaging 43mph with a peak speed over 48.    It was getting close to sunset but we were lit up like a Christmas tree with lights and max reflective gear.   It must've been a sight.  :-} Speaking of Inspiration Point on Highway 2 northeast of LA -- wow, really really awesome.   Unfortunately we had some miscomm with me thinking Tina had pictures and Tina thinking I had pictures!   We'll have to try again when we get back there this afternoon or early tomorrow. Right now we're in Wrightwood, CA at about 5800 feet.   It's a near perfect hiker town with everything close to everything else and a *very* pro hiker populace.   Very friendly folks up here.   If Tina goes back out tomorrow afternoon it'll be an 84 year old trail angel taking her.   She was one of more than a dozen angels listed at the hardware store (where the hiker register is kept).    They all offered various combinations of rides, internet, laundry, and beds to hikers.   Nice to see.   Tonight we're in a very pleasant four room inn that gives a good discount to PCT hikers.   Changing subjects, let me give a bit of a primer on how we're navigating the trail and how you can look at the very same thing.   We use the maps and GPS data created (for free) by a hiker known as "Halfmile".   He's an awesome guy who does very nice work.   The hallmark of his maps is that they have a blue dots placed every half mile along the depicted trail.   That makes it super easy to see where you are, how much further you have to go to water, campsites, towns, and so on.   His GPS data is then keyed to his maps so when you fire up your handheld GPS you see an exact match to the printed maps.   When I say that Tina hiked from mile X to mile Y, that X and Y are references to Halfmile's maps.   Other maps and data books vary quite a bit from his.   If you like maps or want to understand how things relate, etc, please go to his site: http://www.pctmap.net. For those of you who use Google Earth, a really nice way to explore the PCT with all of Halfmile's path and waypoint information is by loading his KMZ file: http://www.pctmap.net/pctdownloads/halfmiles_pct_tracks_waypoints.kmz. Just a few pictures today.   A couple looking back at Cajon Junction (trains trains trains), a typical PCT transit under a railroad and an unidentified salamander (Kevin?)./David 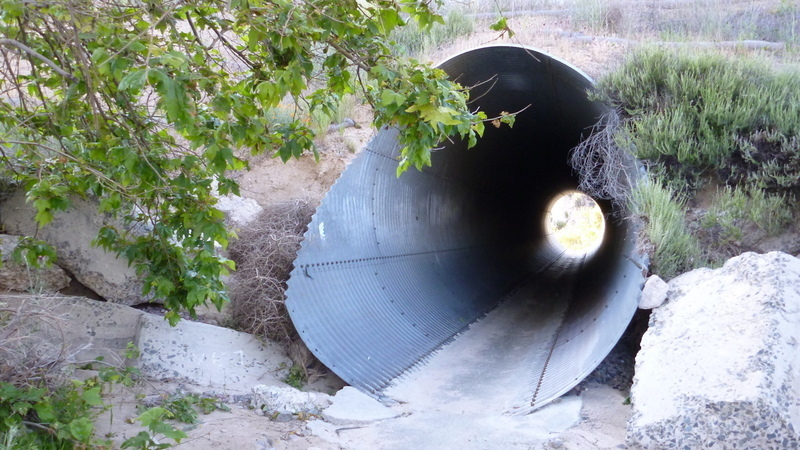 Sorry everyone!   Somehow we've been going for 37 days but didn't get this blog launched until today.    I had wanted to do something more efficient and less intrusive than all my e-mail blasts during our Appalachian Trail adventures last year but made the terrible mistake of not setting this thing up before we actually started moving. To get the ball rolling I'll just start with a quick summary of where we're at, what we've been doing, and what's next.   In the coming days and weeks I'll fill in with more details and will try to stay current with regular updates. Today we are at Cajon Junction -- the place where the Pacific Crest Trail and Sierra Cascades Route cross I-15.   Tina departed the Mexican border near Campo, CA on April 23rd and in 20 days of hiking she's covered 342 miles.    At first we kept the truck so that we could alternate hiking and preparation days as a sort of extended shakedown.   But then finally on May 5th my brother Carl launched me near Mount Laguna on the monster tandem bike rig and we were on our own.  On our own for a 100 miles anyway .. :-}   .. as things turned out, Tina pulled a leg muscle on the 8000' descent from Fuller Ridge in the San Jacinto Mountains and wound up needing to be rescued by Carl from Palm Springs.   Turning lemons into lemonade, we decided to take a full week off trail to recover and spend several days at Fort Leonard Wood to attend our son Keith's graduation and related events instead of the quick in&out we had originally planned.   That worked out fabulously and by the time we returned to the trail on May 21st, Tina's leg was almost completely healed (and is totally fine now). Tomorrow Tina heads out early for a 26+ mile / 5000 ft elevation gain day to reach Wrightwood, CA with me launching a bit after to reach the same destination.   That'll be our last resupply for 90 miles of hiking and 80 miles of biking.   We hadn't planned to stop here today but a storm came in last night bringing forecasts of very high winds (60mph+), precip, and temps in the high 20s for last night and tonight -- dangerous conditions both for hiking mountain ridges and biking up narrow mountain roads.    I'll write more later, but just wanted to get the ball rolling with this initial post.   As per usual, I've attached a few random pictures from the trail.All the best, David 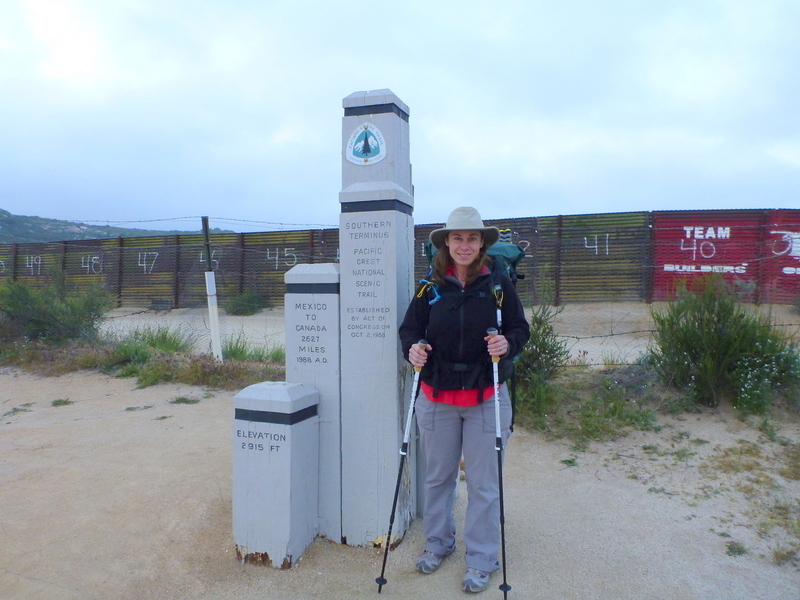